Why is the county spending $62,000 to pay for an oil and gas resource assessment of Sandoval County if it does not plan to use it?

In July 2016, the county entered into an agreement with New Mexico Institute of Mining and Technology costing taxpayers $62,009.07. Services include assessing potential oil and natural gas resources throughout Sandoval County as well as mapping aquifer distribution and depth to understand the effects of modern drilling on groundwater (which 90 percent of New Mexicans depend on for their drinking water in Albuquerque Basin Aquifer).

On Nov. 29, District 1 Sandoval County Commissioner James Holden-Rhodes released a public letter to his constituents outlining his concerns over inadequate water protection in the oil and gas ordinance currently under consideration in Sandoval County. In his letter, Holden-Rhodes wrote, “it needs to be forcefully stated that any drilling in this area poses an extremely high risk for contamination of the drinking water aquifers…”

While the New Mexico Tech Petroleum Recovery and Research Center is the research arm for the oil and gas industry in NM that trains students to work in oil, gas and other extractive industries, it is still critical to have its mapping and aquifer-impact information informing any oil and gas ordinance in order to safeguard residents’ drinking water.

At the Nov. 16 County Commission meeting, Chair Don Chapman said the New Mexico Tech Assessment was only a “review” likely to be done by a junior geologist that will simply review data and provide a report to the county. He added that the report will not likely inform drafting the oil and gas ordinance and will be based on geology, not aquifer or surface-water distribution.

“The Sandoval County Commission has not adequately addressed and assessed all aspects of future oil and gas development in the County prior to voting on an oil and gas ordinance,” said Sandoval County resident Mike Neas. “And they blatantly ignore the only scientific assessment they have commissioned at a taxpayer cost of $62,007.09.”

Commissioners Holden-Rhodes and Eichwald moved to table the ordinance until the assessment is complete and the commission has ample time to review it. The motion died in a 3-2 vote. The report is due in May 2018.

In 2005, Chair Chapman retired from his previous work experience as VP of Global Sales from Dover Chemical Corporation–a company that sells drilling mud additives, which are known chemicals used for horizontal fracking.

Before the meeting, geologist Donald Phillips submitted comments to the commissioners that summarized the general geology of Sandoval County and risks for contaminating drinking-water aquifers from horizontal drilling and fracking. In summary, the report showed high risks for contaminating aquifers in the Albuquerque Basin and extremely high risks on the eastern side of the Albuquerque Basin.

“Due to the heavily faulted nature of the Albuquerque Basin in Sandoval County, unconventional drilling (which includes horizontal drilling and hydraulic fracking) poses a significant threat to the quality of drinking water aquifers,” said geologist Donald Phillips. “In many locations, the Mancos Shale (proposed drilling target) is in direct fault contact with drinking water aquifers.  Elsewhere, the Mancos Shale is heavily faulted.  Such fault zones provide natural geologic conduits for oil, gas, and chemically-laced fracking fluids to move upward and contaminate aquifers.”

In his letter, Holden-Rhodes called for his constituents to contact all county commissioners and request they table voting on the ordinance until the commission has had ample time to analyze the NM Tech study. 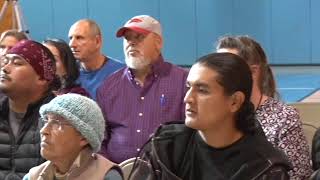