The New York Times (NYT) ran a piece last weekend entitled “The Treasures of Chaco Canyon Are Threatened by Drilling.” When the NYT writes about something people perk up and listen. But, of course, fracking around Chaco has been a hotly contested issue for years, and local people have been exerting all the pressure and influence they have to stop it. One NGO in particular has been in the forefront: Food and Water Watch New Mexico. But every tribal entity in the state and many other environmental NGOs have opposed it, too.

But this January, in the first online lease auction in history, the Bureau of Land Management (BLM) leased close to 850 acres of land for drilling not 20 miles away from the Chaco Culture National Historical Park, a UNESCO World Heritage Site.

Is there any good reason to frack near the world-treasured ruins in Chaco Canyon? Is there a profound need for more natural gas in a gas glutted world? The vast reaches of the San Juan Basin are already drilled and fracked so pervasively that the pump jacks alone, running 24/7, are like a monstrous L.A. freeway gridlock spewing greenhouse gases into the atmosphere and massive profits into the accounts of global corporations with malign abandon. Will the profits from fracking around Chaco be set aside for educational and social program for Pueblo and Navajo children? Don’t make me laugh. Is there anything even remotely responsible about hydraulic fracking near stone ruins that might be subject to earthquake damage should fracking do in northwest New Mexico what it’s done in Oklahoma and elsewhere?

The answer to those questions is a resounding NO. There’s only one obvious reason to frack around Chaco — and that’s to perform an act of flagrant, mean-spirited, purposefully nasty disrespect as an expression of corporate will. The BLM, the Trump administration, the leasees (whoever they are, no one’s telling) are simply throwing the finger at all of us. “Go f..k your f..cking ruins! Who gives a sh.t?” It’s Archie Bunker-ism at its most base and galling. Fracking near Chaco is not really even about making money. How could it be? Leasees are probably making more money than they know what to do with at thousands of other sites in the basin.

No, fracking near Chaco is like hateful graffiti. It’s vandalism. There’s no redeeming social or financial good that might come from damaging one of the world’s greatest cultural preserves. It’s rather like fundamentalists blowing up ancient treasures as an expression of their faith. “There’s a 1,500-year-old Buddha carved into a cliff – let’s blast it to smithereens with a bazooka!” Is there any logical thinking behind such acts? And if there is, what on earth might it be? Is it like the comments one reads under stories about North Korean ICBMs potentially hitting Los Angeles? “Who cares about those California liberal pinkos anyway? Good riddance.” Can it be as stupid and cruel as that? Absolutely. Chaco drillers, and their BLM enablers, are firing another salvo in the cultural war that’s tearing our nation apart.

Fracking around Chaco comes from an idea, or a series of ideas that constitute an ideology, ideas that have undermined the common decency of our society. They are fairly simple to tease out of the history of cultural bipolar politics in this country.

Drilling in Chaco, for no good reason and at the risk of compromising the viability of a monument with vast spiritual importance for many Native people in our region, is a form of corporate racism that reflects the racism of its leaders and spokespeople. In effect, drilling around Chaco is saying that just like in the 19th century when “the only good Indian was a dead one,” the only good monument to Native American civilization is one that’s been destroyed in an act of symbolic genocide.

Another undermining idea is seen in the anonymity of the corporations that purchase the leases around the Chaco Canyon. The BLM doesn’t release their names. It’s possible to find them, I think, and I’m endeavoring to do so, but it takes time and contacts. In the meantime the companies that will make money from destabilizing and effacing Chaco Canyon’s cultural and religious magnetism, do so in the knowledge that no one will know who they are. The lights on the well sites will destroy the clear night sky around Chaco and the astronomical observations made there. The roads to drill sites will be traveled thousands of times by trucks that pollute the atmosphere with dust and fumes, that invade the silence of high desert landscape, and that basically leave irremovable scars on the land.

There’s good chances that industrial solvents will spill out of the sites and contaminate groundwater. And this scarring and polluting of the land and air and night sky will all be done by companies with absolutely no accountability whatsoever. And, it’s tempting to say, all in the pursuit of filthy lucre. That is, of course true, but not the whole story.

At the heart of these disgusting acts is the idea that “freedom” is license, a license to do anything you want to do, even if you know that what you want to do is opposed by multitudes who see your irresponsible “freedom” as an act of hostility, not as an expression of liberty and enterprise. The pursuit of absolute freedom is sociopathic, not an act of purposeful competitive drive, as the corrupting idea of “free enterprise” (make that absolutely free), would have us believe. Absolute freedom is based on might not rights. If you’re big enough and rich enough, you can do anything you want to until someone bigger and richer and mightier than you stops you, or so that wretched logic goes.

So here we are at Chaco Canyon, an invaluable historic, cultural and sacred site, deeply revered by local people and by organizations that represent the world as a whole, and some anonymous profit seekers have been given license by the federal government to compromise and perhaps even destroy the treasures there. And the license these corporate entities are given is carte blanch. It allows them to behave in a way that says, “Even if we don’t really need to, we’re going to frack there anyway and frack all we want. It’s our right to get away with anything we can, even the rape of the sacred, whatever the hell that is. So get out of the way, or we’ll crush you, too.”

That’s what we’re up against. Let’s make no mistake. Invisible forces are declaring war against what we hold dear, and they are doing so behind the shield of

And how does one respond to that? There’s only one weapon that works against might, if you’re not mighty yourself, and that’s information. And the only shield the mighty have is our ignorance. Freedom to do is only matched by freedom to know. And for citizen stewards of public rights and public places, our principle job is to strive to know more and to shrink our ignorance so it can’t be used effectively against us. That’s the invaluable vein of public-spirited richness in the Information Age of the 21st century. We can work to mine information that counteracts malign ideas ravaging the public good for private profit. The freedom to learn and to act on what we find out, however marginally or indirectly, is the saving grace of the digital age — if we use the Internet as an educational device, not as a blithering distraction.

*Nullius in verba: take nobody’s word for it 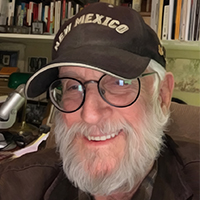 V.B. Price has lived in New Mexico since 1958, mostly in Albuquerque’s North Valley, writing poetry, journalism and non-fiction. His website is vbprice.com.